Second round of multi-actor workshop in Charente River Basin (MAL4)

MAL4 in the Charente River basin organised its second round of multi-actor workshop.

You can read below how this went. 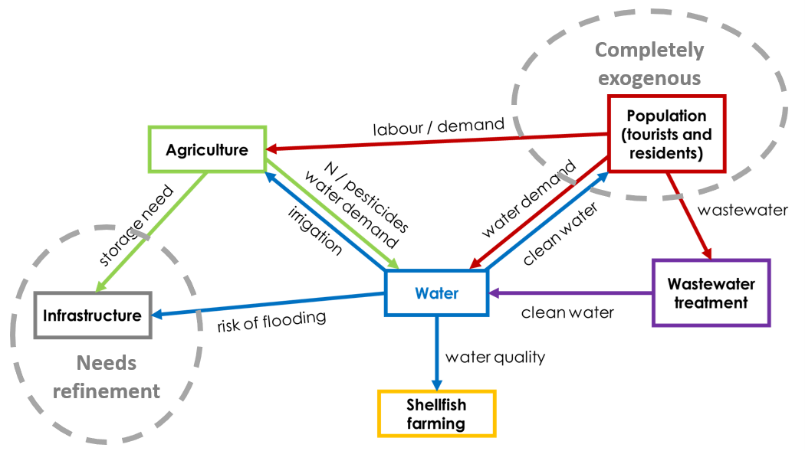 We had a core group of 20 stakeholders who had attended the sectorial workshops in line with their scope of expertise, with some of them also having attended the previous workshop.

They represented the main challenges of the Charente River territory. These included significant environmental pressure – especially on water resources -  from different economic activities such as summer tourism, agriculture, and shellfish farming.

Firstly, we performed a presentation and engaged in a discussion relating to the business road map for the territory (with a reminder of the "desirable" scenarios* and previous work). We discussed the key actions needed to move towards the desirable scenario for the territory and which sectors and stakeholders should be involved in these actions. People were able to rank the actions using interactive tools.  Main economic sectors, agriculture, shellfish farming and tourism should be involved in key actions, designed to reach a desirable future and to enhance land sea synergies. The move towards a collective management of water, as a common good, should involve a large range of stakeholders, including local authorities. In this desirable future, the territory as a whole should become more sustainable, consume less water and promote collectively high quality land and sea products.

Then, we made a presentation and engaged in a discussion on the general structure of the land-sea model. We first presented the links between modelling and the real world, how models were developed in terms of the process itself, from sector workshops and mind mapping to Causal Loop Diagrams (CLDs) and Stock-flow models. We presented interactions between the submodels, the model's challenges, and the hypothesis on the dynamics of the systems. We asked for feedback from stakeholders and if anybody was interested in being more deeply involved in developing the models. Two stakeholders from the shellfish farming and the trade ports sectors express an interest in specific meetings for this purpose.

We are currently engaging with stakeholders from several backgrounds (tourism, water sector, ports, agriculture, shellfish farming) to complete and discuss the outputs of the workshop, focusing on land sea synergies.

Pandemic effect: There were many more people in the face-to-face meetings; apparently, some of them got fed up with zoom meetings and hence it was difficult to keep them motivated.  However, we tried to stay connected with them during the two periods of lockdown and restrictions due to the covid pandemic. The first lockdown was very strict, and people were still unfamiliar with Zoom and remote meetings. There were exchanges, but it was not the same as face-to-face exchanges.

* The desirable scenario designed in collaboration with stakeholders involves widespread societal change, wherein stakeholders across the territory work in synergy to achieve a sea-land continuum. By using a mosaic for the space and its associated activities, as well as applying governance strategies at finer temporal and spatial scales, it is possible to make the territory more resilient in the face of economic and climate change. It also includes large-scale investment, along with support for local development. Other key aspect of the “desirable” scenario is the way in which shellfish farming and agriculture develop:  locally focused, sustainable, creating jobs and providing quality product.